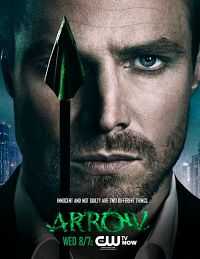 The series takes a new look at the Green Arrow character, as well as other characters from the DC Comics universe. Although Oliver Queen/Green Arrow had been featured in the television series Smallville from 2006 to 2011, on the CW, the producers decided to start clean and find a new actor to portray the character. Arrow focuses on the humanity of Oliver Queen, and how he was changed by time spent shipwrecked on an island. Most episodes have flashback scenes to the five years in which Oliver was missing.