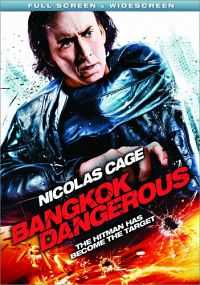 Although shot in 2006, Bangkok Dangerous is finally hitting theaters today. While such a delay might suggest that the movie is an unwatchable mess that’s purposefully being dumped in the autumnal movie release wasteland, it turns out that Bangkok Dangerous is more Bangkok Tedious than Bangkok Odious.

A remake of an Asian movie of the same name, Bangkok Dangerous is directed by the original film’s sibling helmers, Danny and Oxide Pang. Nicolas Cage sleep-walks through his role as Joe, a world-weary, loner assassin who heads to Thailand to perform the textbook “one last job.” As an English-speaking white man in Bangkok, Joe finds himself the proverbial fish out of water. His mission is to carry out a handful of contract killings on behalf of crimelord Surat, after which he will retire. As almost every other hitman movie has taught us, nothing ever goes according to plan for an assassin.

Joe hires a petty street criminal named Kong (Shahkrit Yamnarm) to assist him — and to cover his own tracks. Joe eventually takes a shine to Kong and becomes his mentor. Meanwhile, Joe also finds himself falling for a local woman, the mute pharmacist Fon (Charlie Yeung). But danger is closing in on Joe and he finds his newfound relationships threatened by his deadly line of work.