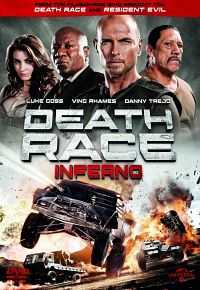 Chances are that if you’re reading this, then you’re already a convert to the ways of the Death Race franchise, so what you’ll probably want to know is how the new film, Death Race: Inferno, holds up compared to part two. Thankfully, Inferno is just as much B-movie fun, sticking to the traditional sequel convention of being bigger, louder and considerably more insane.

While Death Race 2 made every effort to build up the new character of Carl ‘Luke’ Lucas (played by Luke Goss), while introducing his own story arc, Inferno centres almost entirely on action and makes absolutely no apologies for it. So what better way to review the film than to highlight the more gloriously bonkers moments that perpetuate the it…

Back in the 80s, any self-respecting action flick had a plethora of punch ups, especially at the film’s climax, but sadly it was a trend that faded away. This year The Last Stand and Bullet To The Head have already redressed the balance, with the stars of both bringing back their unique cinematic movement; after all, Arnold Schwarzenegger walloped Bennett, Richter, everyone in The Running Man and even the Predator, while Stallone had the punchfest franchise that was Rocky, as well as going head to head with the mighty Wesley Snipes in Demolition Man – and that’s just a fistful of examples.