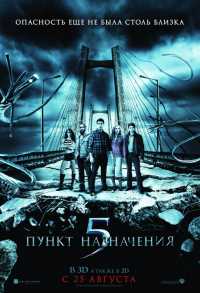 Final Destination 5 is a 2011 American 3D supernatural horror film directed by Steven Quale and is the fifth installment of the Final Destination film series. It was written by Eric Heisserer and stars Nicholas D’Agosto, Emma Bell, Miles Fisher, Arlen Escarpeta, David Koechner and Tony Todd. Despite the previous film being originally announced as the final of the franchise, due to its financial success, development of Final Destination 5 begun in 2010. Filming took place in Vancouver, as with the first three installments. It was theatrically released in August 12, 2011, and on DVD on December 27, 2011, which includes deleted scenes, documentaries and a parody music video by the cast. The film received mostly positive reviews; the first film in the franchise to do so. Critics praised the plot, CGI, death scenes and tone, especially in comparison to the previous installment. The film was a financial success and is currently the second-highest grossing film in the franchise.