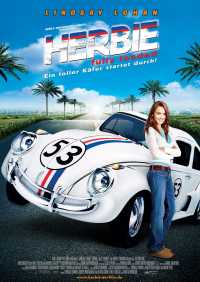 Herbie: Fully Loaded is a 2005 American sports-comedy film directed by Angela Robinson and produced by Robert Simonds for Walt Disney Pictures. It stars Lindsay Lohan as the youngest member of an automobile-racing family, Justin Long as her best friend and mechanic, Michael Keaton as her father, Breckin Meyer as her brother, David Collins as her second brother and Matt Dillon as a competing racer. The film features cameos by many NASCAR drivers, including Jeff Gordon, Jimmie Johnson, Tony Stewart, Dale Earnhardt Jr. and Mark Martin. It is the sixth and final installment of the Herbie franchise, following the television film The Love Bug (1997) and the only theatrical Herbie film since Herbie Goes Bananas (1980). This film serves as a direct sequel to the original films and ignores the events from the fifth film The Love Bug. The film was released on June 22, 2005 and grossed over $144 million worldwide.