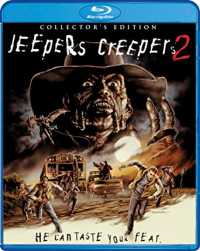 After hearing several police reports, the Taggarts go hunting for The Creeper and soon make radio contact with the school bus. The Creeper attacks Bucky, but Rhonda stabs it through the head with a javelin. Dante begins prodding the Creeper’s wing, only for it to grab and decapitate him. The Creeper tears off its injured head and uses Dante’s severed head to replace its own. The students decide to leave the bus to find help, but the Creeper returns and chases them into a field, where The Creeper kills Jake and takes Scotty.