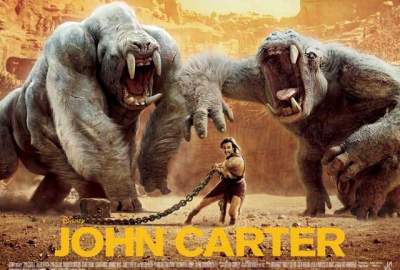 In 1881, Edgar Rice Burroughs attends the funeral of his uncle, John Carter, a former American Civil War Confederate Army captain who died suddenly. Per Carter’s instructions, the body is put in a tomb that can be unlocked only from the inside. His attorney gives Carter’s personal journal for Burroughs to read, in the hope of finding clues explaining Carter’s cause of death.

In a flashback to 1868 in the Arizona Territory, Union Colonel Powell arrests Carter. Powell, knowing about Carter’s military background, seeks his help in fighting the Apache. Carter escapes his holding cell, but fails to get far with U.S. cavalry soldiers in close pursuit. After a run-in with a band of Apaches, Carter and a wounded Powell are chased until they take to hiding in a cave that turns out to be the object of Carter’s earlier searching, the ‘Spider Cave of Gold’.

A Thern appears in the cave at that moment and, surprised by the two men, attacks them with a knife; Carter kills him but accidentally activates the Thern’s powerful medallion, and is unwittingly transported to a ruined and dying planet, Barsoom. Because of his different bone density and the planet’s low gravity, Carter is able to jump high and perform feats of incredible strength. He is captured by the Green Martian Tharks and their Jeddak Tars Tarkas.