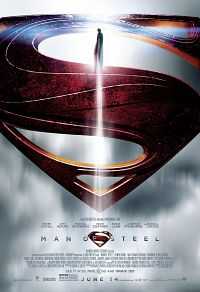 The title “Man of Steel” tells you what you’re in for: a radical break from the past. The absence of the word “Superman” leads us to expect a top-to-bottom re-imagining, and that’s what the film delivers, for better and worse. This is a 2013 version of the story: dark, convoluted and violent, chock full of 9/11-styled images of collapsing skyscrapers and dust-choked disaster survivors. It’s sincere but not particularly funny or sweet. The hero is a glum hunk, defending a planet so scared of apocalyptic conspiracy that it assumes anyone who presents himself as good guy must have ulterior motives. Steel is what you need to have in your spine if you’re going to be super in this world.

Directed by Zack Snyder (“Watchmen,” “Sucker Punch”) and overseen by Christopher Nolan (the Dark Knight trilogy, “Inception”), “Man of Steel” largely abandons the sunny spirit and kooky humor of the Christopher Reeve-starred films, as well as Bryan Singer’s homage to them, 2006’s “Superman Returns.” It brings the character in line with the recent craze for brutal, morose tales of loners defending a world that doesn’t appreciate their sacrifices. This time the big guy’s suit isn’t Dick Tracy red, blue and yellow; it’s a muted ensemble of synthetic chain mail that’s described as “battle armor” rather than as a uniform or costume, and Supes wears his underwear on the inside,

thank you very much. Scene-for-scene, this is a first-rate example of a Hollywood fantasy released in the early 21st century: a new-car-smell summer blockbuster. It has wobbly handheld camerawork signifying “authenticity,” a glum color palette, skyline-shattering super-fights, hardware whose designs crib from “Alien,” “Dune”, “Independence Day” and Spielberg’s “War of the Worlds,” and a detailed mythology that can plug into an expansive, Marvel-style “universe.” When humor bubbles up, welcome though it is, it feels like a tonal lapse.

“Man of Steel” also breaks with past “Superman” films in how it tells its story. The script, which is credited to David S. Goyer of the “Blade” films, starts with a prologue on Krypton, envisioned here as a John Carter-style land of towering hyper-structures, “Matrix”-looking hovercraft, and winged beasts. Superman’s dad Jor-El (Russell Crowe) and mother Lara (Ayelet Zurer)are fighting two battles at once: to convince the planet’s government that its environmental recklessness is causing the planet’s core to melt, and to contain a rebellion led by General Zod (Michael Shannon), who’s outraged that Jor-El dared to violate Krypton’s biological breeding protocol and conceive a son the old-fashioned way.