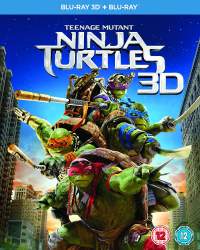 If nothing else, “Teenage Mutant Ninja Turtles” reminds us that nostalgia is often used as a mandate for spectacularly lazy filmmaking. Yes, I too loved the action figures, video games, cartoons, and previous live-action commercials, I mean movies. But a “Teenage Mutant Ninja Turtles” film that’s trying this hard to pander to my childhood love of pizza, karate, and talking animals shouldn’t be this imaginatively challenged. We’re talking about a film where exposition is dumped over viewers’ heads in every other scene, action scenes are loud and uncoordinated, and every joke feels like it was scripted hastily in the vain hope that punch-up writers would later rewrite them. Instead of a fun and unchallenging limp down memory lane, “Teenage Mutant Ninja Turtles” is an energy-sapping exercise in futility that will leave you begging for less.

In “Teenage Mutant Ninja Turtles,” an inquisitive reporter discovers that you can make an inherently absurd premise even more hard-to-swallow with a convoluted backstory. Channel Six news anchor April O’Neil (Megan Fox) wants to be taken seriously as a journalist, so she investigates a city-wide crime wave involving gun-toting bad guys called the Foot Clan. She becomes even more determined to follow this story after witnessing a mysterious vigilante stop a Foot robbery by chucking an industrial-sized shipping container at the bad guys. She then discovers that this crime-stopping hulk isn’t working alone, and that both she and her own late father have ties to this shadowy superhero that go as far back as 1999. So April spends the first half of “Teenage Mutant Ninja Turtles” establishing how she’s related to the Ninja Turtles—disciplined Leonardo (voiced by Johnny Knoxville), hot-head Raphael (Alan Ritchson), goof-off Michelangelo (Noel Fisher), and geek Donatello (Jeremy Howard)—and soft-spoken (but totally unsuspicious!) philanthropist Eric Sacks (William Fichtner). Fifty minutes later, conflict ensues.