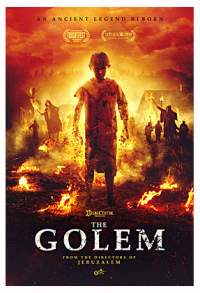 The Golem is a 2018 Israeli period supernatural horror film directed by Doron and Yoav Paz, and written by Ariel Cohen. It stars Hani Furstenberg, Ishai Golan, Brynie Furstenberg, and Konstantin Anikienko. The Golem is based on the Jewish legend of the same name, and the film’s creators felt that the legend, which they referred to as “the Jewish Frankenstein”, had never been properly developed into a film since the 1951 version The Emperor and the Golem. Originally it was intended to retain the original appearance of the title character for the film, “In the beginning, when we just started on the idea for the movie, we tried to tell the story as it is. That is with the real giant creature made of mud and clay,”. The idea was soon abandoned, however, after realizing that it would not fit with the story they wanted to convey, deciding instead to reimagine the classic tale for a more contemporary audience while staying true to its original themes. Principal photography for The Golem commenced in the summer of 2017 near Kiev, Ukraine, for a month and a half, with the majority of the film was shot in an isolated outdoor set, “in the middle of nowhere”.