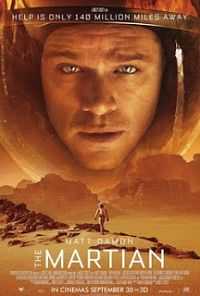 In 2035, the crew of the Ares III mission to Mars is exploring Acidalia Planitia on Martian solar day (sol) 18 of their 31-sol expedition. A severe dust storm threatens to topple their Mars Ascent Vehicle (MAV). The mission is scrubbed, but as the crew evacuates, astronaut Mark Watney is struck by debris. The telemetry from his suit’s bio-monitor is damaged and Watney is presumed dead. With the MAV on the verge of toppling, the remaining crew takes off for their orbiting vessel, the Hermes.

Watney awakens after the storm, injured and with a low-oxygen warning. He returns to the crew’s surface habitat (“Hab”) and treats his wound. As Watney recovers, he begins a video diary. Lacking communication with Earth, his only chance of rescue is the next Mars mission, four years later: the Ares IV will be landing 3,200 kilometers (2,000 mi) away at the Schiaparelli crater. Watney’s immediate concern is food; being the mission’s botanist, he improvises a garden inside the Hab using Martian soil fertilized with the crew’s bio-waste and manufactures water from leftover rocket fuel. He then plants the crew’s unused potatoes. He also begins modifying the rover for the journey to the Ares IV MAV site.