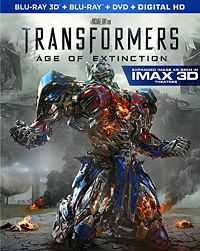 The Autobots are back for a new battle in Transformers: Age of Extinction. This time Sam Witwicky is gone, but a brave inventor named Cade Yeager (Mark Wahlberg) has stepped in to help Optimus Prime bring down the evil Decepticons, who once more threaten humanity. With the help of some new Autobots and some new human characters, a new battle for the Earth begins.

Our theatrical review will weigh in on whether or not this new release is worth your time, while this column will focus solely on the film’s use of 3D. Considering seven separate categories, To 3D Or Not To 3D evaluates the full scope of the 3D viewing experience. Think of it as a consumer’s guide for your movie-going, complete with a viewers poll where you can weigh in on how you plan to see Transformers: Age of Extinction yourself.

Bay is no newbie to 3D, as Transformers: Dark of the Moon was the first in the franchise to go with the added dimension. For that film, Bay shot sections of the film in 2D with a 3D post-convert, and others in 3D. For Transformers: Age of Extinction, he did the same, though this time the 3D cameras he employed are a new smaller digital IMAX camera. You can bet that a great deal of care was put into both the in-camera 3D and the post-converted. Or at least with a budget of $165 million, you’d assume so. I won’t pretend that I could pick out what scenes where shot in 3D and which were post-converted.