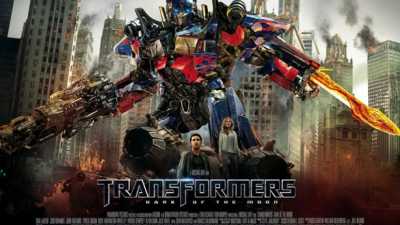 When the 154-minute Transformers: Dark of the Moon finally ends, your feeling is one of exhaustion, not exhilaration. Pleased with his first effort but downright apologetic about the second Transformers movie, director Michael Bay has thrown every imaginable visual effect

CG animation and physical stunt, all in 3D, into the battle for planet Earth. Bay really needed a gag shot where one alien transforms itself into the kitchen sink.

Make no mistake: Out of a line of Hasbro toys, Bay has created a world of his own. Call it Bay World. It has its own logic, which is movie logic cubed. It has its own heroes and villains, only try to tell the toys — sorry, action figures

Apart. Is the machine that favors red colors a good machine or a bad one? And once you figure that out, does the damn machine switch sides?

That a huge worldwide audience is primed for this movie hardly needs stating. But the range of those actually enjoying the onslaught of technology at the expense of human drama might be narrower than Bay, Hasbro or Paramount think

The kick of the first movie was the pleasurable shock of humans and these transformative mechanical beings interacting. The third chapter is dedicated to little more than wanton destruction.