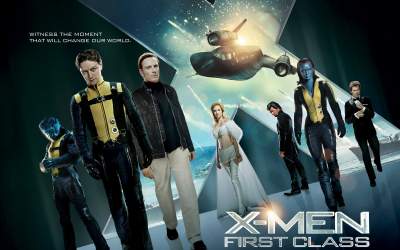 Let’s be clear about this from the start: at its best, X-Men: First Class is a Batman Begins-level putting back together of a cinematic franchise, one that many had fallen firmly out of love with after the double hit of Brett Ratner’s vacuous X-Men: The Last Stand and Gavin Hood’s relentlessly downbeat X-Men Origins: Wolverine.

By going right back to basics, First Class not only finds interesting things to say at the very beginnings of the X-Men story, but it might just make you believe in origin stories all over again. And while it doesn’t quite sustain itself across its entire running time in the manner that Nolan’s Batman reboot managed, director Matthew Vaughn come far closer than you might expect. Make no mistake, it’s a triumph.

The film gets off to a flying start in a pre-title sequence that introduces the terrific Kevin Bacon as Sebastian Shaw, and the young Erik Lehnsherr. It’s a dark start for a film that doesn’t spend much of its time in the doldrums (it learns the lessons of the Wolverine spin-off, certainly), but it convincingly sets up the drive that underpins the older version of Erik, played by Michael Fassbender, and the unflinching nastiness of Shaw. Furthermore, the film from the off has a strong, rounded antagonist, and it helps it enormously.